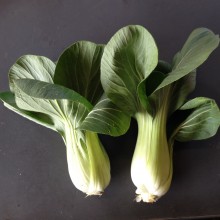 Preparation: Wash leaves under cool running water to remove dirt before cooking or eating.  The entire pak choi can be eaten.  Leaves are often trimmed from stems once washed because leaves and stems cook at different speeds
Cooking: More mature leaves or the stalk of Pak Choi can be cooked by boiling, steaming or sautéing.  To steam, place the prepared leaves and stalks in a steamer and cook for 2-3 minutes or until just tender.

Pairings: Pak Choi’s mild flavor is a good, fresh addition to stir-fries, soups, noodles or meat dishes.  The smaller, more tender, younger Pak Choi leaves are best eaten raw such as in a salad.
Nutrition: Adults should consume 1.5-2 cups of leafy green vegetables per week according to the USDA  MyPlate recommendations.  Pak Choi contains high levels of vitamins C and K and is also low in calories.